Pep Guardiola continued his 100% start as Manchester City manager as he watched his side comfortably beat Bournemouth at the Etihad.

Without the suspended Sergio Aguero, Belgian Kevin De Bruyne was the star of the show, scoring the opener just after the quarter hour mark and setting up Ilkay Gundogan for a debut Premier League goal 25 minutes from the end.
Goals in between from Kelechi Iheanacho and Raheem Sterling ensured City made it five Premier League wins from five, and eight from eight in all competitions.
A late red card for Nolito after a petulant headbutt was the only blemish on an otherwise perfect afternoon. 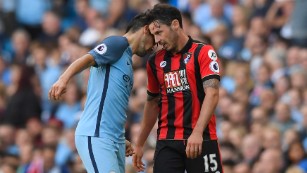 Nolito saw red after his headbutt on Bournemouth’s Adam Smith.
“The important thing is we won just a few days after a Champions League game,” Guardiola said in his post-match press conference. “The Champions League is tough mentally so to recover from that is something that makes me happy.
“The quality of our players made the difference. I’m very happy because I know the quality of the team we have beaten. I’m happy because people will be so proud when the famous players run without the ball.
“Kevin is a special player. Every time he decides the right decision and we are lucky to have him. Hopefully he can keep playing the amazing football.”

Arsenal made it three Premier League wins in a row with a comprehensive victory away at 10-man Hull City.
After defeat on the opening day against Liverpool and a draw against Leicester City, Arsene Wenger’s side was languishing in the bottom half of the table, but nine points from nine sees the Gunners move up to third.

Alexis Sanchez opened the scoring for the visitors, deflecting Alex Iwobi’s shot past Eldin Jakupovic before Jake Livermore was sent off for handball.
Sanchez stepped up to take the resulting penalty but saw his effort was saved by Jakupovic. Theo Walcott eventually doubled Arsenal’s lead 10 minutes into the second half, latching onto a neat back-heel by Iwobi.
Hull was then awarded a penalty of its own, after Petr Cech was adjudged to have brought down Dieumerci Mbokani, which the in-form Robert Snodgrass coolly dispatched.
Despite Hull’s late pressure, goals from Sanchez and summer signing Granit Xhaka added gloss to the scoreline and sealed a 4-1 win.
“I think overall we had a convincing performance in two different situations,” Wenger said after the game.
“11 against 11, I thought we played well. When you play 11 against 10, it is, of course, not the same mentally and psychologically. But we remained serious and in the end we won the game in a convincing way.
“We had a big shock in our first game and I said straight away after that we face a mental test to see how well we respond.
“So overall I think we responded well. We were not ready physically at the start of the season, we are now much better so let’s hope we can continue our improvement.”

Reigning Premier League champion Leicester City has endured a stuttering start to the season but put in its best performance so far with a 3-0 win over Burnley.

Summer signing Islam Slimani, acquired for reported $39 million, scored two goals on his league debut, before a late own goal from former Leicester loanee Ben Mee sealed victory.
Elsewhere, West Ham’s nightmare start to the season continued as it suffered a 4-2 defeat away a West Brom.
After moving into its shiny new home at the Olympic Stadium, 2016/17 was supposed to signal the start of a new era for the London club.
Instead, it currently sits one place above the relegation zone after five games, having conceded eight goals in its previous two matches.
And Everton continued its resurgence under new manager Ronald Koeman.
Follow more football news here
The club recorded an impressive 3-1 home win against promoted Middlesbrough to remain unbeaten and on the coattails of Manchester City.

TRUMP APPEARS TO BE LYING, AGAIN, TO SAVE HIS OWN ASS